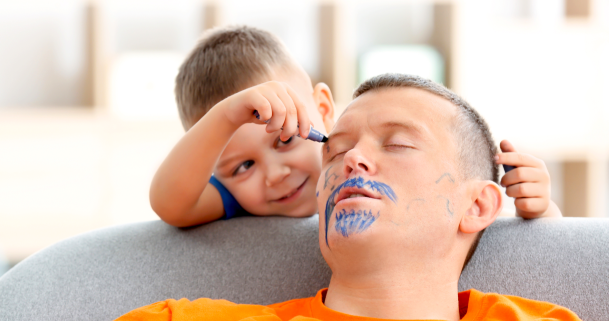 Your sense of humour is your greatest weapon.

“Have you ever tried to home school a child when you’re a moron?”
– Joey Diaz

Forget about the petty things in life, if you don’t think there’s a silver lining here, you’re wrong. You’re just taking a lump right now, just like everyone, but don’t doom yourself with negative thoughts about yourself and your life right now. Rough patches are tough, and we all happen to be in one. I feel for you. But, everything happens for a reason, and the best way through can be to lighten up. Here are some good jokes from around the web to make you smile.

Sherlock Holmes and Dr Watson go on a camping trip.  After a good dinner and a bottle of wine, they retire for the night, and go to sleep.

Some hours later, Holmes wakes up and nudges his faithful friend. “Watson, look up at the sky and tell me what you see.”

“I see millions and millions of stars, Holmes” replies Watson.

“And what do you deduce from that?”

Watson ponders for a minute.  “Well,

Astronomically, it tells me that there are millions of galaxies, and potentially billions of planets.

Astrologically, I observe that Saturn is in Leo.

Horologically, I deduce that the time is approximately a quarter past three.

Theologically, I can see that God is all powerful and that we are small and insignificant.

Meteorologically, I suspect that we will have a beautiful day tomorrow. What does it tell you?”

Holmes was silent for a minute, then spoke. “It tells me that someone has stolen our tent.”

When NASA first started sending up astronauts, they quickly discovered that ballpoint pens would not work in zero gravity. To combat the problem, NASA scientists spent a decade and $12 billion to develop a pen that writes in zero gravity, upside down, underwater, on almost any surface including glass and at temperatures ranging from below freezing to 300°C.

The Russians used a pencil.

This woman rushed to see her doctor, looking very much worried and all strung out. She rattles off: “Doctor, take a look at me. When I woke up this morning, I looked at myself in the mirror and saw my hair all wiry and frazzled up, my skin was all wrinkled and pasty, my eyes were bloodshot and bugging out, and I had this corpse-like look on my face! What’s WRONG with me, Doctor!?”

The doctor looks her over for a couple of minutes, then calmly says: “Well, I can tell you that there ain’t nothing wrong with your eyesight….”

A turtle was walking down an alley in New York when he was mugged by a gang of snails. A police detective came to investigate and asked the turtle if he could explain what happened.

The turtle looked at the detective with a confused look on his face and replied, “I don’t know, it all happened so fast.”

A sandwich walks into a bar. The barman says: “Sorry, we don’t serve food in here.”

Your life will come together again. Wear a smile today.