You are here: Home1 / Blog2 / Uncategorized3 / Be True to Yourself 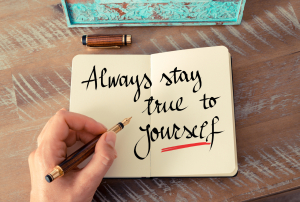 Be True to Yourself

This concept can be harder than it sounds.  What if you don’t know who you are?

Many people go through life feeling uncomfortable in their own skin; yet don’t consciously understand why. They question why they are unhappy or more often, look for happiness through the purchase of the next greatest “thing” that will bring them a feeling of temporary joy. They get up and do the day to day grind with their job accepting it as they know nothing better for themselves. It’s easy. What if you could find happiness in you? What if happiness came from understanding your passions better and knowing you could achieve a life feeling purpose and one of that may in fact be the life of your dreams? Would you do it?

If you are feeling this way, I encourage you to step outside the box and allow yourself to delve into the very thing that might get you excited to get up in the morning.

Think about who you were as a child.  Were you energetic, a daydreamer, jokester, artistic, inquisitive, technical, outdoorsy or studious? As children, we are our true selves as we haven’t yet been exposed to the outside influences that taint our dreams and suggest who we should be.

“I’ve always loved the idea of not being what people expect me to be.”  – Dita Von Teese

As adults, these outside influences tempt us into becoming something or someone that isn’t natural for us.  For example, one of my clients became an accountant because his dad told him that he would always have a job if he did. True, but was it a good fit for him, given his personality?  This career choice was actually the farthest from his genuine self.  As a child he was a jokester, had tons of friends and throughout university he was the life of the party. He had the gift of gab, was outgoing, funny and enjoyed being social.   When I asked him what would he do, if he could do anything with no obstacles in front of him, in essence, what would be his ideal career, he told me his dream was to do stand up comedy and to entertain people.  He dreaded the 9 to 5 structure of his current job and furthermore began to really dislike spreadsheets, balance sheets and numbers in general.  I then asked him why he wasn’t working in comedy. His answer, he was worried about what people would think of him as it wasn’t perceived as a “professional” career. His parents wouldn’t be proud. He wouldn’t make the income that he needed as he had already built a lifestyle around his salary as an accountant. And what he didn’t say to me directly, but alluded to, was that life was easy and predictable at the moment. Change is tough, it is scary, and it is uncertain. But what most don’t realize is that the flipside with any change, is that while it is uncertain and fearful, it can also be so exhilarating, exciting and fulfilling.

At the end of our conversation, he committed to work together with me to work past the fear and the obstacles and to devise a plan to live his best life.  He decided to use his job at the accounting firm as a ‘survival’ job while he took steps to build his dream job.  In fact, his background in accounting proved to be a benefit in his plan as he was considering opening his own comedy club.

“The quality of your life is directly related to the authenticity of the dreams you choose to follow.” – Anonymous

If this story resonates with you, and you are experiencing these same feelings, you aren’t alone. The reality is that over 50% of the population are complacent in their jobs and feeling unhappy and unfulfilled. If you are ready to take the leap and you aren’t sure where to start, we offer career exploration options through our DREAM BIG career coaching platform at www.profoundcoach.com. Life is too short to be unhappy, commit to yourself to explore the options and start living your most profound life.